In additional to motif, we use the term Theme in this work, regarding the fact that Motifs are considered to be shorter and more basic. However, the distinction between theme and motifis not always drawn rigorously. Themes also manifest itself throughout the music via variations.

Even for modern music genre, most of them comply with this song writing mindset, as human brains tends to process structureness and repitions eaiser, which also render repition and structureness essential in music.

After having a glimpse of music writing by human, let's see how machine does it.

In recent years, with the advanced of deep learning networks, many previous works use Transformer nertwork to model music pieces in an autoregressive manner. That is, make the machine to predict the next note given all the previous generated notes. Along with the powerful attention mechanism, Transformer models have the ability to generate good quality music if given abundant and clean music datasets. Nonetheless, the music generated sounds somehow random in the sense of direction. The main culprit is that transformer model fail to learn repition from massive data. (It could to some extent learn to repeat local patterns, but fail to reuse the musical theme again.) To tackle this problem, we think that perhaps we should teach transformer models the way human compose a song. That is, we should apply Theme information into transformer models.

In our work, we trained an embedding model for melody clustering via contrastive loss. For contrastive learning, we consider the following 3 augmentation techniques:

Within these augmentation techniques are considered positve samples for contrastive learning.

After training the embedding model, we conduct DBScan clustering algorithm on the melody embeddings and search for the largest cluster.

Here is an example of the melody embedding distance visualization. 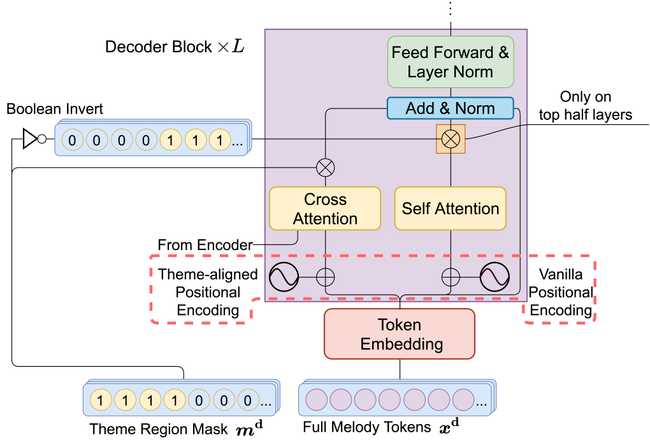 The core idea of Theme Transformer is to utilize two memory network. One for recording the past generated music content, the other one for the theme condition. This is done by utilizing parallel cross and self attention modules with gating mechanism. The theme condition is given at the encoder side, hence cross attention can be viewed as the module for considering the theme and self attention is for considering all the previous generated music content. Together, they formed a two memory network architecture.